The man in the woods

Julia Fawlks wants to help her quirky friend Bea get ahead with her new career in hypnotherapy, so she gives her access to her house on the edge of Windsor Forest with the idea Bea can use one of the rooms to practise from when Julia is at work. What could be the harm in such an arrangement between firm friends?  But Julia begins to have vivid dreams of liaisons with a horned man who comes for her.  At first they are a pleasant distraction then they become increasingly intrusive, and ever more disturbing.

In amongst the trees of Windsor Forest there lurks a horned man – a hunter – watching, waiting … always.  If she were sensitive to the ethereal she may have felt his presence but Julia Fawlks, jogging in the March dawn, did not notice him.  Her mind was closed to such things.   And the horned man watched her through the scantily clad spring branches – tangled silhouettes in the indigo hue.  He gazed at her trundling along the edge of the woodland, drawing ever closer to his reach, and her breathlessness lifted the corners of his mouth.

Fiona's short story The Traveller won 3rd place in the 2011 Asham Antholog - Something Was There...

Looking down through scrawny beech branches, I watch the traveller walk along the remote path tracing the edge of the woods.  He has no idea I am here.   To his left are the grassy hills, to his right the woods; no inn, no hut, not a dwelling place in sight.  Fallen leaves scuttle up behind him, harried by the breeze.  He glances back, footsteps faltering and I will him to break his journey, drawing him to rest.  As if in response his pace slackens, he regards the apricot tinge seeping into the clouds strewn across a watery sky.  Yes!  The traveller veers off the road and crosses to the trees.

He drops his gear in the shade of a yew where the ground is smooth and bare while I follow him into the rim of the woods.  Soon he has a fine fire going – hot enough to cook on and dry his cloak and later it will keep the dark and the beasts at bay.

With hardly an inkling of my presence, he sips a brew and stares pensively into the flames.  Tired.  He is weary of travel and from the direction of his approach I know he is homeward bound.  See, as I watch him I learn about him….

The hand of glory When two strangers request a hand of glory from the witch Briony, she is coerced into accompanying them to perform a sinister spell used by tricksters and thieves. Full of suspicion and prejudice, Briony takes with her a Vila imp for her protection.

To her consternation, Briony finds herself struggling against her attraction to the younger man, Gareth. She cannot possibly allow herself to fall in love with a thief, especially one who has the audacity to revile her lifestyle. Yet their mutual desire is too strong to be denied…

Until, too late, Briony discovers she has made a dreadful mistake. Can she undo the harm she has caused? Even if Gareth survives, could he welcome her into his arms once more?

Excerpt:
At first glimpse the urn appeared to be filled only with salt, dotted with specks of spices, peppercorn and dried chilies. Margaret reached in, spilling more white grains, and pulled out a dark brown, leathery hand. Its skin sunk onto the bones, each pore clearly visible. Thin fingers bent slightly inwards toward the crease-etched palm, as though relaxed with sleep. The fingernails were ivory shells, bright against the darkened flesh…

William turned to her. “Can it be completed en route...or at a certain destination?”

“It can be done almost anywhere if you know the recipe and have a chimney.”

“There are the wicks to sew in place,” Briony said. “Gentlemen, it is simply not finished. If you wish to have it, come back...”

“We have no desire to ride up and down the country,” Gareth interrupted tersely.

Briony glared at him. “Then board at the inn.”

“At your hideout? I would sooner enter a viper's nest!”

The Hand of Glory is Published by Eternal Press.

After witnessing a violent domestic dispute, Jack is entrusted with the task of escorting Clara to the order of St. Alba’s Jawbone. Their journey comes to a halt when they are coerced into stopping at Godwick, where Jack takes up residence in his old master’s house. In her last days of freedom, while Clara waits to enter the silent order, she befriends the fearful apprentice boy, nurses the ailing but lecherous master Dermot, and coyly avoids the advances of the dashing Sheriff of Godwick, for Clara has eyes only for Jack. But it seems his head is turned by an old flame of his, a woman determined to see that Clara becomes a bride of Christ, rather than Jack’s wife. Thrust into opposing teams as the day of the pilgrim march nears, will Clara and Jack speak of their love for each other, or will they bow to social pressure and let the surging crowds of Godwick sweep them further and further apart?

“A tailor; as an escort!” howled one soldier.

“Is this so?” bellowed another.

“How do you plan to defend her from villains?  Wave your needle at them, eh?  Darn them to death?”

Another wave of laughter cascaded over the table.  Jack shrugged and smiled.  Stabbed his vegetables and smiled.

“Now hear ye all, a scissors can be a formidable…” began Clara.

But the minstrel talked over her, “There’s a song to be had out of that, for sure!”

Once the hype of Christmass has drained away, and hard harsh reality has set in,leaving you broke and depressed there is no better way than to gently bring you back up than to curl up with a box of what is left of the chocolates than a good light hearted yarn. This novel fits the bill exactly! With a handful of humour, the authoress draws you into the medieval world of shopaholic Clare and reluctant hero Jack, as they follow a path of mishaps to follow their destiny. You are skilfully drawn into their world, and share with them all the trials and tribulations which they endure in their quaint (to us) world. This love story will leave you feeling refreshed and every now and then, you will catch yourself smiling when you remember passages of the story.

Clara and Jack set off on a journey that is intended to put them each on a new course but events intercede with a charming culmination.   The setting is the England of centuries ago but I found the writing to be captivating and the descriptions so richly embroidered that I had a real sensory awareness as I read.  I almost felt that I could hear the sounds of the village and smell the combination of scents from the streets and houses.  For me, this added greatly to the reading experience

I am sometimes a bit put off this genre because the stories are predictable but Fiona Law makes this story authentic and believable with just enough whimsy to make it a pleasure to read. The skillful writing keeps your interest without taking too much advantage of your imagination. I especially liked the legend of Saint Alba’s Jawbone- wonderfully colorful imagery that was particularly engaging.

I also read Law’s Rosemary Thief  and found it equally enjoyable.  I hope that there will be more of these stories to fill my head with the heady fragrances of merry old England. 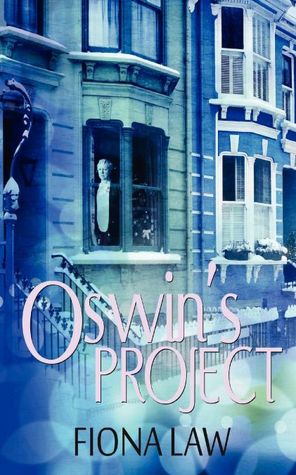 Gifted pupil, Oswin boards with his cousins in a spooky Edwardian house. His favorite cousin, Gemma, thinks it may be haunted, but her loud-mouthed, older sister, Beryl, insists that there is no such thing as ghosts! When Beryl talks of having Gemma sectioned under the mental health act, Oswin decides to prove her wrong, to prove that ghosts do exist and that their house is haunted. He builds some nifty gadgets and gets Gemma to keep an accurate recording of her ghostly experiences. Despite Beryl's constant interfering, they begin to gather evidence that there is indeed paranormal activity in the house…

Excerpt:
“That is why I say,” Beryl scolded, “don’t look at the clock like that!”
Oswin nodded.
“Because there’s nothing there.”
He nodded again.
“Gemma doesn’t need to see people thinking they’ve seen things too.” Beryl took another enormous bite of her toast and chewed slowly. With deliberation. Staring hard at Oswin.
He longed to point out while her mouth was full that Gemma hadn’t seen him see the shadow on the stupid old clock. But he nodded instead. Politely.
Once Beryl had swallowed, she laughed, brushed imaginary crumbs off the table and said, “Sorry, Oswin! I just had to get that straight with you. We want you two to be friends, but don’t encourage her in any airy-fairy stuff, please! Just snakes and ladders and other innocent games will do. It’s very important that Gemma is not led astray. Ghosts and that sort of thing do not exist. It’s a proven fact.” She smiled again.

other titles by Fiona Law

...Pungent, thick and dangerous.  She dropped the rosemary sprigs into her basket.  Her hands were sticky from having touched the herb and its smell would cling to her for hours, like a lovers.  Pressing her palm to her nose she closed her eyes, enjoyed the oily, cloying scent.  Then ready to go she  glanced up at the house.  She froze.  There was a figure in the doorway, a silhouette in a billowing cape, shaking a staff in the air and stepping forward with a war-like cry that caught the air and blew across the grounds.  ...

from The Rosemary Thief.

The Rosemary Thief published by The Wild Rose Press is full of winter and cooking and passion.

This story about a humble cook and a wicked witch is absolutely superb. But, I'm going to be snarky up front. Whoever edited this piece did the author an extreme disservice. This amazing story deserved far, far better than this. The paragraphs (do you understand what they are for?) were long, run-on and misplaced, the use of commas--well, you didn't use them effectively.

BUT ... What a fantastic read! The simmering attraction between…I can't do it. Telling you anything more might ruin the delicious surprise. If I could have, I would have given this book a 4.99 rating because the editor...well you know...but gee, I'm serious, The Rosemary Thief by Fiona Law, is just exquisite.

After the second non-paragraph, I just threw my pre-conceived pickiness out the window with a ~who cares~ because The Rosemary Thief is truly the most charming short story I've read in years. I could go on and on about the visual artistry of description, the pungent word choice, the savory rich scenes--sounds like a fantastic meal, huh?

That's what this short story by Fiona Law represents--a virtual feast to the senses. I loved it, I will put it on my keeper list, I will tell all of my friends to buy it, and I know I will reread it often.

Seven of Swords, published in The Yellow Room issue 2 is about a woman so lonely she summons the seven of swords from her tarot deck.  link http://www.theyellowroom.com/